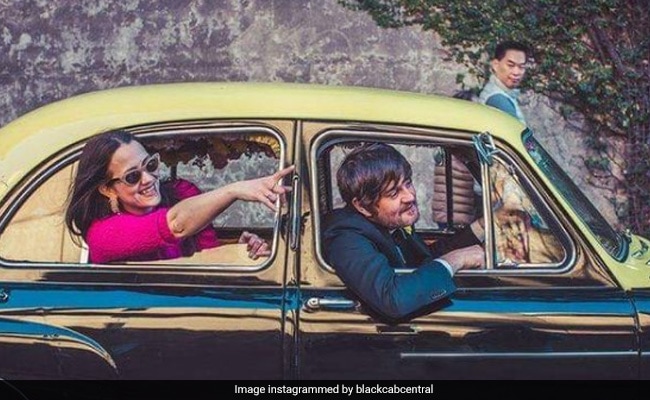 He told SBS Hindi, “It started when I watched an episode of Top Gear and they had a race between taxis from around the world. He said, in the race, a New York cab, a South African cab, a Mexican Beetle and one from Russia. The car was there. But, he also had this cab from India, which is a Hindustan Ambassador and it was very colorful and caught my eye.”

When the black-and-yellow car won the race on the TV show, Robinson decided to add an ambassador to his collection. He has named this black and yellow ‘Bollywood car’. He said, “I thought it might be a good idea to include Indian taxis in my fleet and advertised it in Sydney as a rental car and wedding car for Indian people and people who love Indian culture. “

People hire homegrown taxis for various purposes like advertising their business and weddings. Robinson has decorated the taxi in traditional Indian style with artifacts brought from his trips to India. He said, “I have decorated it with many artefacts, which I acquired during my trip to India for my 40th birthday. These have come from Amritsar to Darjeeling.”

Robinson recalled how an Indian man once stopped to take a picture with a Bollywood car because he hadn’t seen a black-and-yellow since moving to Australia 20 years ago.

Meet Jamie Robinson, an ???????? offering taxi rides in Sydney. Jamie has an ???????? Ambassador car in his fleet of taxis – ‘Bollywood Car’ – decorated with traditional Indian artefacts he brought during his trips to ????????. https://t.co/vm9uiIzWgZ

hyundai creta 2021: This Hyundai car made a big splash, 8 months long waiting period – you may have to wait upto 8 months to get new creta