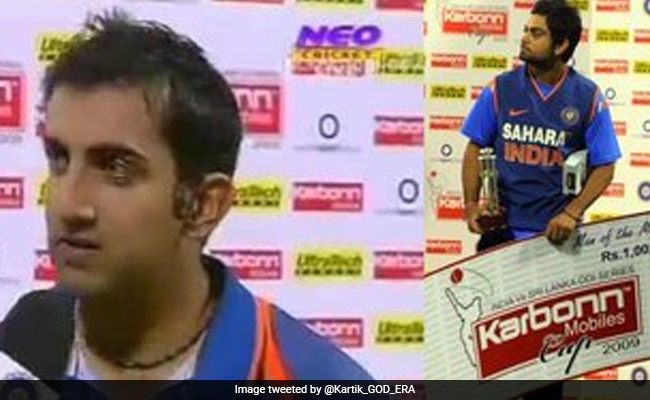 Gautam Gambhir has done many memorable feats for Team India

Happy Birthday Gautam Gambhir: Gautam Gambhir has comeJ is celebrating his 40th birthday. In his cricket career, Gambhir has done some such feats which are very priceless. He has played many such innings in his career, due to which the Indian team won or the Indian team was successful in saving the match. Who can forget his innings of 97 runs in World Cup 2011? Due to Gambhir’s crucial innings of 97 runs, the Indian team was successful in winning the World Cup title. Apart from this, in the final of the 2007 T20 World Cup, Gambhir scored 75 runs in 54 balls, due to which the Indian team was able to score 157 runs. Gambhir’s innings was very important in both the matches and India became the world champions. These two exploits of Gambhir will be counted among the most precious feats in the history of cricket. Apart from this, he has also done some such exploits, knowing that you will be stunned.

Kohli was given his man of the match
Even though there was a tussle between Virat Kohli and Gambhir during an IPL match. But once Gambhir had given his Man of the Match award to Kohli. In the match against Sri Lanka in 2009, Gambhir scored an unbeaten 150 and Kohli scored 107 runs in the first century of his ODI career. Both had handled the Indian innings when Indian team legends Sehwag and Sachin were out within just 23 runs. But after this Kohli and Gambhir handled the innings and added 224 runs. India won this match by 7 wickets. After the match, Gambhir was awarded the man of the match title, but Gautam considered Kohli the rightful owner and gave his award to Virat. This gesture of Gambhir won the hearts of all Indians.

read this also
World’s tallest building ‘Burj Khalifa’ seen on Indian team’s new T20 World Cup jersey, watch video
Rishabh Pant was seen crying after KKR’s defeat, Prithvi Shaw’s tears also came out of his eyes, watch video
Venkatesh Iyer made a strange shot with one hand, fans said – ‘One handed helicopter shot’
Hetmyer reached the dugout after getting out, then it was amazing, the umpire had to be called- Video

Made KKR twice winner
KKR was once considered a laggy team in the IPL. But as soon as Gambhir took over the captaincy of KKR, the team got transformed. Under Gambhir’s captaincy, KKR won the IPL title twice. Gautam Gambhir did many feats under the captaincy of KKR and put the team in front of the best teams in the history of IPL. Gambhir played more than 150 matches in IPL and scored 4 thousand runs and included himself in the list of best batsmen of IPL.

After 12th you can make your career in these fields