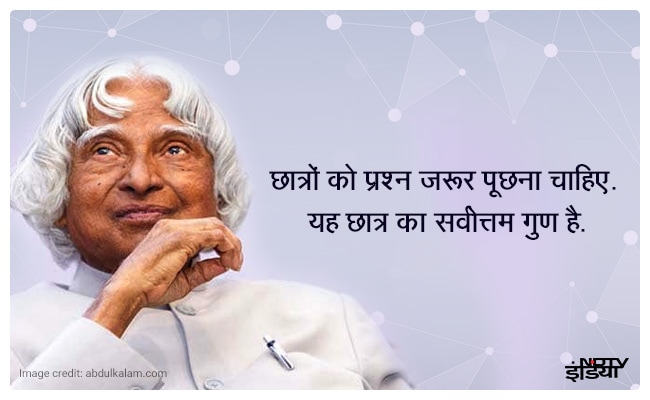 World Students Day 2021: These interesting things are related to Missileman, who is everyone’s guide

APJ Abdul Kalam Birthday Special: Dr. APJ Abdul Kalam was born on 15 October 1931 in a middle-class family in Dhanushkodi village of Rameswaram, Tamil Nadu. The birth anniversary of former President of India, great scientist, teacher APJ Abdul Kalam, who realized his idea that one has to burn like a sun, is celebrated as World Youth Day. Due to Dr. Kalam’s fame, greatness, youthful thinking and being in the role of a lifelong teacher, the United Nations decided to celebrate his birthday on October 15 as World Students Day in 2010 in his honor. Gaya. Bharat Ratna Dr. APJ Abdul Kalam ji was called the son of Mother India, Missile Man, Rashtrapurush, Nation Guide, Great Scientist, Great Philosopher, True Patriot. School children should get inspiration from his life, for this purpose it was decided to celebrate his birthday as World Student Day (former President APJ Abdul Kalam) by the United Nations. Dr. Kalam is affectionately called the ‘President of the People’. Kalam will always be remembered for his invaluable contribution in strengthening India’s capabilities in the defense and space sector.

Uttar Pradesh Chief Minister Yogi Adityanath did ‘Koo App’ on the birth anniversary of Abdul Kalam, ‘Former President of India, great scientist, the epitome of purity, simplicity, transparency and commitment, ‘Bharat Ratna’, ‘Missile Man’ Dr. A.P.J. Tribute to Abdul Kalam on his birth anniversary. Realizing Indianness in totality, your personality-creative is a guide for us.

Lok Sabha Speaker Om Birla did ‘Koo App’ on Kalam’s birth anniversary, ‘Tributes to the birth anniversary of Bharat Ratna-awarded former President Dr. #APJAbdulKalam ji. Along with making India a space power, he played an important role in strengthening the security system of the nation. He was such a patriot who dedicated every moment of his life to the country.